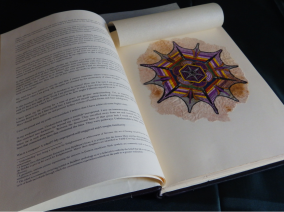 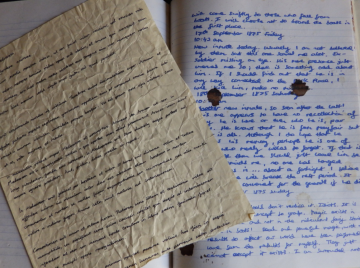 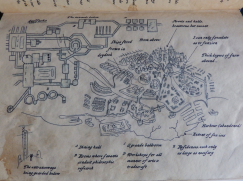 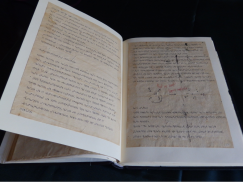 The Ties That Bind

The Book of the Dark was a significant Aeon mythos prop which featured in the first game we ran. It was the result of 6 Refs working flat out for several months, creating content to bring life to what has spun into the Aeon Universe.

Why was it made?

The Book of the Dark was the key item in resolving the game’s plot. It contained all the information that the players needed to escape the scenario presented obscurely across the chapters it contained. The game’s winning rituals were presented in the form of iambic pentameter within the Playwright’s endings, for examplr; warnings pertaining to the truth of reality and the creatures that inhabited were concealed in fairytales. It became apparent that the book was also the real focal point of the game and its existence was the ultimate cause of everything that was happening.

How was it made?

Each section of the Book was written by a different member of the Ref team. We also provided illustrations. The final word count exceeded 50,000.

Most of the book was printed to save the Ref group’s sanity. Appropriate fonts were chosen to reflect the time periods in which the papers were originally written, and we used appropriate paper and aging effects to add a greater appearance of authenticity. Illustrations were inserted where relevant and we took extra care to ensure that they were presented in an appropriate fashion. The one section of the book that we could not cheekily print was that of the Unfortunate, whose scrawlings were done with ink and paper in their Asylum cell. That required a special level of attention and we thank Andrew very much for his patience!

The papers were professionally bound by Peter Doyle, Book-Binding and Restoration of Preston who was massively entertained by our project and was only too happy to work with the unusual range of material we provided him. We would have very much loved to have gone with a more eccentric and extravagant design, but we felt it was not strictly in keeping with its history. There was no reason for The Editor to have had it done in such an odd fashion.

The book was, in game, the result of several individuals over the course of history who had each been touched by something beyond our common reality. The first writer was a Buddhist monk who, through meditation and regrettable cosmic awareness, had gained insight into something beyond his plane of existence. He perceived a greater and more significant reality that connected all others and what lay at its heart.

His writings were discovered by a mariner after a trading voyage to Asia who read them and found his dreams becoming more and more vivid. He came to realise that in his unconscious state, he was beginning to navigate seas far beyond the ones he was familiar with. He was able to recount many of his experiences and adventures, producing maps and recalling strange, cryptic languages.

A 16th century English playwright was next. Having come into possession of the previous writings through queer chance and having struggled with the ending of a play they had been working upon, they found, quite inexplicably, two potential finales present themselves.

There then followed a children’s cautionary fable writer who, as canny characters may have realised, was foretelling the 6 possible outcomes of the game depending on their choices.

In the Victorian era, a naturalist obtained the writings. Coincidentally, or perhaps not, he himself had been investigating Strange Sciences and, spurned on why what he perceived as evidence, found himself entirely capable of travelling to the Space Between Things – The Dark. There he began to categorise and experiment upon the peculiar flora and fauna he encountered, hypothesising the forces and powers that made things as they are.

Then, the unfortunate: An individual who had come too close to the truth and had been committed to Bedlam for the crime of knowledge. Acting as something of a beacon for some of the fauna that the previous keeper of the writings had encountered, they found themselves ridiculed and punished for their cries of warning. Unfortunate for them, and unfortunate for those around them who were subsequently devoured.

The loose papers that told the tale until this point were found, haphazardly tied together, by an academic in a quirky knick-knack shop. Overcome by curiosity by their nature, he took them and had them properly bound so that they might be better to study. Not until, of course, he himself had read the contents and been touched by the same sweet madness. Known only as The Editor, he ordered the papers sequentially and added introductions to the sections.

Finally, the book came into the possession of a, well, let’s just call him an Antagonist, who made his own annotations before finally passing it onto Niles Hansford, the individual who was the reason for the game occurring.

What happened to it?

Well now, that would be telling.

The Book of the Dark was secreted away from the location by one of the characters. Precisely where it is in the Aeon Universe at this time is something of a mystery. We have no doubt that it will appear again. It has a habit of doing that… .